Ranjana lipi fascinates me not simply because it is my wife’s name but for its uniqueness as an alphabet also known as Lun aakh (Golden script) that finds people working to make it more popular. Not to preach but to practise. I suggest my friends and organizations working for the common cause to use the lipi widely as masthead for their website, visiting card, invitation card, logo, monogram, motif, banner, festoon, etc. wherever and whenever possible for the sake of the Newar identity worldwide. It may not be exaggerating much if I say here that its use, I feel, help reach the message to the target group fast at once!

Last week while at Rhenock for Dashain, we received a call from Kalimpong. It was Rabison Shakya from Kathmandu who wanted to visit us when in Gangtok. Welcoming his visit, I told him also to meet Yogbir Shakya as well while there to know more of the place, people and activities in the region.

To thank the Government for honouring the Newar language as one of the official languages of Sikkim in 1995, what my father advised resulted in the form and shape of a handbook Newa: Varna, Lipi Ra Bhasha Parichaya – a compilation to throw light on and showcase our rich and vast language, culture and tradition besides the scripts – more than one and only Ranjana lipi. Here we have our language long lost with many of our rituals on the verge of extinction, it was a right step at right moment to make our people aware of what we possess that needs to be preserved, safeguarded and promoted at right earnest before it is too late. This was the need of the hour to uphold the dignity of the Newar identity. Not even two generations past, it is sad that we have forgotten our forefathers – without whose foresight and vision, we would not be here in Sikkim what it is today!

While working and looking for the materials for the handbook, we came across the Hem Raj Shakya’s Lipi Vikas Talika or the Table of the Evolution of Scripts brought out by National History Research Division of the Department of Archaeology,Ministry of Education, His Majesty’s Government of Nepal in the Sikkim Research Institute of Tibetology (now Namgyal Institute of Tibetology with its original name restored) in Gangtok that appear as the centre-spread therein. With 3,000 copies in its second revised, enhanced and improved edition added to its 2,000 copies for the first edition in 2001, like many people in Nepal, Rabison Shakya when presented with a copy too readily recognized to have seen it before. Thanks for the attractive mural cover design by Yeshu Mathema in the Graphics Edge that matched perfectly to the theme our book and its target group! 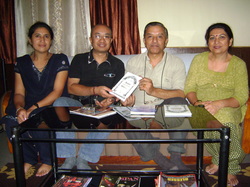 Sangita and Rabison Shakya with us

Rabison was also interested to know more about the project work our daughter Rachna had done on mechanical translation from Hindi to Nepali and vice-versa for her BE(Computer Science). This was just left like that and abandoned with her joining a multinational company that made her leave the shores of the country for the USA.

To see her off, we were in Mumbai in May 2003 and there at Crossword Rachna noticed a chart with Ranjana script along with other wrapping papers. We brought it home and framed for a wall hanging. Rabison told me over phone that previous evening he noticed the frame in the staircase and had taken its photograph as well. He had to point out that there was some mistake as the letters therein were not all Ranjana but something else too. Ranjana script thus used fascinated me for the efforts to make a design out of the script to decorate my wall. He then mentioned me of the chart Alphabet of the Ranjana Script designed by him. I ask him if it was not the same one that Dr. Sarvottam Shrestha gave me last month when here for Indra Jatra. Later when checked, I found it so – complete with his name and ISBN 99933-559-3-3 © 2006. We have a mind to replace the chart in the frame with this latest one and congratulate him for the excellent work depicting Ranjana lipi in gold on blue background accompanying material in white i.e. silver exactly replicating the manner it appears in ancient religious scriptures.

Rabison Shakya has done works like Japanese-English Dictionary and Japanese-English-Nepali Dictionary besides some on different scripts. He was kind enough to bring for me a copy of his book Nepal Lipi Varnamala / Alphabet of the Nepalese Script ISBN 99933-34-36-7 First Edition 2002. I would like to share with our readers here some lines from the Preface written by Kamal P Malla, President Chwasa Pasa. He described Rabison Shakya as “a young and brilliant pioneer of True Type Fonts for Newar Scripts, who provides the curious reader with Roman Transliteration for Newar characters as well as words used to exemplify them.”

“These scripts are local offshoots of Kutila characters, a descendant of Gupta script with a leftward slant and triangular shape in general that developed ca. late 7th century AD. The Tibetan, the Bengali and the Maithili characters are also based on this script, also known as Siddha – matraka, complete with all phonetic of sound values. A famous 15-script inscription dated A.D. 1654 installed by Pratap Malla at his palace courtyard calls the Nepalese Scripts, Gola mola akhara, Ramja akhara and Newara akhara. Although there are thousands of manuscripts, inscriptions, and land-grant documents written in these scripts, the testimonials of a vibrant literate and mutually tolerant Hindu-Buddhist culture, these scripts had been officially ousted by Nagari since the Gorkhali conquest of the Nepal Valley in 1769. Their knowledge soon began to decline among the literate for want of State patronage and encouragement. These scripts were also abandoned for printing by Newar men of letters in 1909 because of the unavailability of printing facilities. It was only since the early 1950s that interest in the older scripts revived, particularly with the publication of handbooks such as Baidya Panna Prasad Joshi’s Nepala Desaya Aksara Bodha, 1951 and Hem Raj Shakya’s Nepala Lipi Sangraha, 1953.”

Malla further mentions, “Mr. Sakya has also given here specimen tables of Brahmi, Bhujimmola and Ranjana. Whereas Brahmi was used, for example, in Asoka’s inscription in Lumbini inscribed on the sandstone pillar inscription in the 20th year of his coronation, Ranjana had spread to Tibet, China, Japan, Korea and Mongolia side by side with Mahayana Buddhism as a sacred script, often used in scriptures and monograms. Bhujimmola, on the other hand, had been in use in the Nepal valley and its environs from about 11th century to the 17th century A.D.”

He concludes, “The knowledge of these scripts as well as of the languages such as Classical Newari, Hybrid Sanskrit, and Sanskrit as the key to medieval and late medieval culture of the Nepal-mandala. Handbooks such as Mr. Sakya’s can be used for reviving our weakening links with this culture, of which these scripts are a tangible symbol.”

Rabison had also to inform me Newar fonts developed by him can be downloaded free from www.google.com / Ranjana Fonts.This reminds me of the other remarkable work done by Devdass Manandhar with his Ranjana Thahiti. Nareshbir Shakya, who recently launched seventh publication, The Newarland English monthly adding one more feather to his cap under the banner of Elohan Publications that bring out six different periodicals including Lun Aakh in Ranjana lipi besides Layakoo and Nali. It was Nareshbir who made me reach Devdass for Ranjana Thahiti as he benefitted immensely for his publications. It converts Roman Script into Ranjana and Devnagari Scripts that can be converted to Unicode Devnagari as well.

It is now found that Devdass also benefitted from Rabison’s works in developing Thahiti that was passed on to Nareshbir, who reached it through his Elohan Publications to many of the readers like us – not before we met Rabison Shakya here in Gangtok!

Further,  Rabison with Satendra BS Tuladhar has produced musical composition The Melodies of Six Seasons in Nepal with Notations & Lyrics CD ISBN 99933-982-5-x that he sent us along with his book Lhasa Bamjah Dhamjuya Karovara Pau – An Inscription of Tibetan Documents ISBN: 99933-34-87-1 2002 on his return home from Nepal through Guruji Surya Bir Tuladhar.

Not only the notations with lyrics for the songs included in The Melodies of Six Seasons in Nepal in Newar Bhasha  are given but even their Raag, Taal and musical instruments played for each composition of the historical melodies in sitar with the accompanying traditional drums and tabla and the year (Nepal Samvat) that dates as far back as NS 856-888 for Malsri find mentioned in the in-lay booklet provided – published under the auspices of the Thyaka Research Centre. This CD we had in our collection and one more copy could benefit someone whom it is passed on to enjoy what Rabison and Satendra have given.

Lhasa Bamjah Dhamjuya Karovara Pau, his research works on Lhasa business makes an interesting reading with materials over two hundred years old supported by over a dozen reference books, should find a ready market worldwide, if published in English as well.

May we have the benefit of many more from this multifaceted talent amongst us in future too – our best wishes!