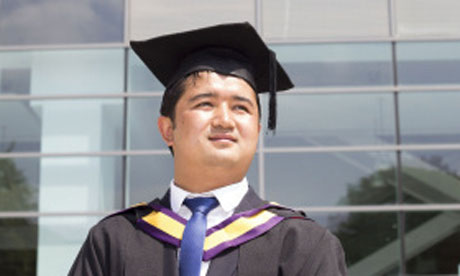 A son of yak farmers is to be the first ever doctor in his rural village in Nepal after graduating from Manchester Medical School this week.

Kanchha Sherpa, 27, will now return home to Melamchighyang, where the 1,500 local people are served only by a midwife and have to trek several hours to the capital city of Kathmandu for medical treatment.

“I have a dream to save people in my village who are dying from diseases like leprosy and diarrhoea,” he said. “I want to return to Melamchighyang to make a big impact on people’s health there and in the neighbouring villages. Many people still go to see witchdoctors rather than seek medical advice. Some villagers see leprosy as a curse and try to hide away.

“I want to try and educate people about modern healthcare and I think this will be better coming from an insider, who was born there and speaks their language known as Hyolmo.”

Many villagers suffer from typhoid and other diseases because they don’t have access to proper toilet facilities or clean water. Sherpa, the seventh generation of his family to have lived in Melamchighyang, will start practising on a medical bus in the Sherpa village after completing a foundation year in either the UK or Nepal.

Almost everyone in the village is a farmer, and nobody has ever become a doctor or an engineer, said Sherpa, who wants to inspire younger villagers to follow their ambitions. “I will have to convince people to come and see me,” he said. “There have been no doctors until now and most people are uneducated. But it’s like heaven, I’m still in love with it. It’s a tiny village of 1,500 people and we share one language, one culture and everyone in the village knows everyone. We are like a family.”

Sherpa’s primary school head teacher Purna Gautum travelled to the UK to attend his graduation ceremony on Tuesday. Gautum quickly recognised Sherpa’s flair for science, and persuaded the Nepalese Children’s Trust to sponsor him through his A-level studies in Kathmandu and medicine degree in Manchester.

“He has been like a father to me,” said Sherpa, who lived with his grandmother as a child after his parents moved to India. “He told me if you have a desire, if you work hard enough in this world, nothing is impossible.”

Gautum set up a school in Melamchighyang in 1985 which, through his efforts, has grown from 19 pupils being taught in the corridor of a house, to 260 pupils with access to computers and the internet, learning the equivalent of GCSEs. “Nobody has to go to Kathmandu now,” said Sherpa.

He said he has been able to build up his confidence and skills in Manchester, but he struggled at first with the weather and the language. “Although I spoke English when I arrived I found it really hard understanding the different accents of my housemates when I first got here,” he said. “I lived with people from London, Newcastle, Birmingham and Liverpool and I spent the first few months having to get them to speak really slowly.”

During his six years studying in the UK Sherpa also worked part-time as an interpreter for Refugee Action and as a waiter at the Namaste Nepal Restaurant in West Didsbury.

Tony Freemont, head of undergraduate medical education at Manchester Medical School, said: “Kanchha is a truly driven individual who really wants to give something back to his country, and his village. He is an inspiration to young people across the world, whatever their background, that they too can become doctors, improve healthcare in their country, and make a difference to people’s lives.

“We’re delighted that Manchester Medical School, along with the Nepalese Children’s Trust, were able to provide the funding to make Kanchha’s training here in the UK possible.”

Sherpa plans to begin practising in Melamchighyang but eventually wants to expand to surrounding villages. Gwenda Culkin, of the Nepalese Children’s Trust, said: “It has been a huge challenge for both Kanchha and the Trust to get to this stage. However, the most challenging part is still to come as we make plans for the future medical project in Kanchha’s home village. Having been to one of the best medical schools in the world though, we are sure Kanchha has an excellent foundation.”